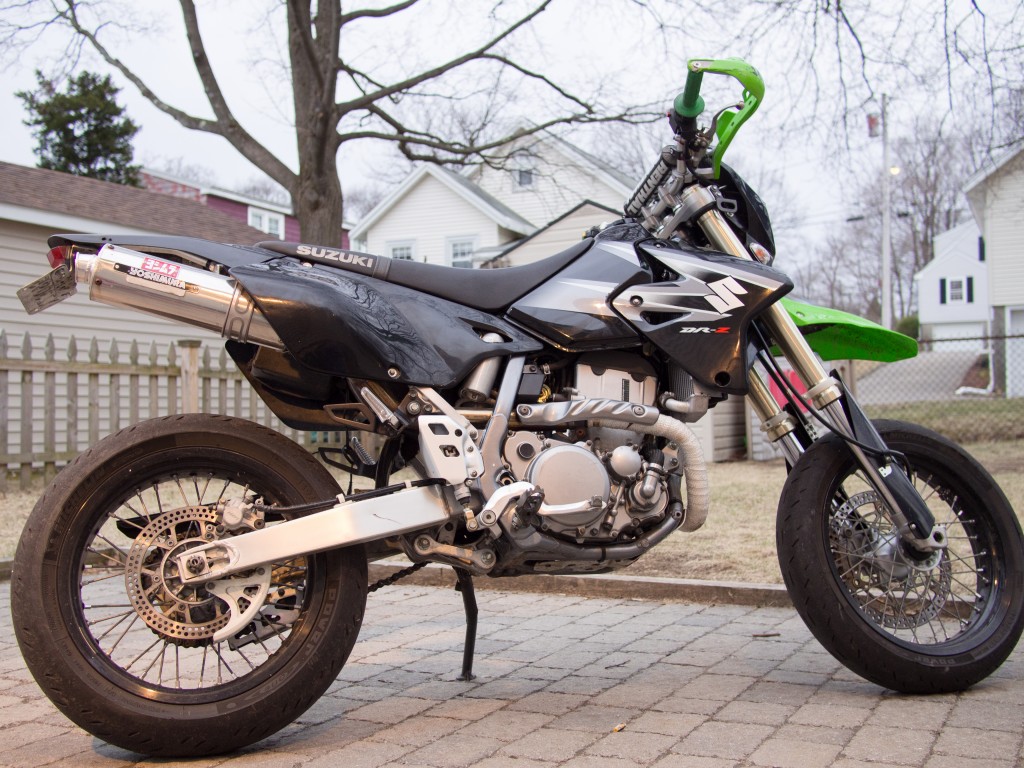 Today marked a return to the moto-commute. Since changing jobs in the summer of 2013 I have been disincentivized to commute on the bike for a couple reasons, both related to traffic though.

That’s somewhat beside the point, however, as I also sold my Yamaha FZ1 which was a superb commuter, but ultimately a bit overpowered and boring. Having recently purchased a used, and only slightly abused, 2006 DR-Z400SM I was eager to get back in the saddle but hesitant due to a lack of trust in the DR-Z. I am still in the initial setup and adjustment phase of owning this bike and the DR-Z is so drastically different from the smooth and refined FZ1 that it is taking me a bit longer to get fully comfortable on it.

Let’s just say today was a success but not flawless.

The DR-Z is, not surprisingly, a little out of its element when asked to cruise at near 80 MPH and much prefers 60-ish. Tucking down helps give it an instant +5 MPH.

It is very comfortable, despite the narrow seat, and affords the operator (that’s me) plenty of visibility over and around other cars. That coupled with the very light steering makes it easy to slip in-between cars when they are moving slower than they should. Standing up is also very easy and comfortable. This helps see even further down the road and also helps alleviate soreness from the aforementioned narrow seat.

Even though the 400cc single-cylinder power plant doesn’t propel like the 1000cc four-cylinder rocket in the FZ1 it is still more than adequate for fast highway driving. I might actually want to lower the gearing to remove most chances of me getting a ticket.

The last quirk of the ride was the suspension, usually very supple yet responsive, exhibited some slightly unsettling behavior over the traffic dips in the asphalt, caused by thousands of heavy vehicles stuck in bumper-to-bumper traffic on a daily basis. These repetitive humps in the road felt similar to what a severely out of balance tire might feel like. Perhaps a steering damper/stabilizer is in order.

The DR-Z is proving to be a quirky, fun, and more than adequate ride both on-road and on-trail. I’m looking forward to spending significantly more time in the saddle.